Large, lush, and serene lot includes 20,604 sq ft of land and is zoned R-7.5!!! Explore all of your possibilities to build your dream home or investment property in Kaneo...

A wonderful opportunity to own a home in Ahuimanu Gardens with low maintenance fees and majestic views! This home features an updated bathroom, enclosed back lanai, lami...

Rarely available 4-bedroom 2-bath single family home in Lilipuna on large 15,432 sqft lot. This is the perfect opportunity to renovate and expand or build new. Front of t...

Welcome home to this spacious and ready to move in 3-bedroom at Haiku Hale! Recently renovated from top to bottom including new appliances. Enjoy the cool Koolau breeze a...

OPEN JANUARY 28th, Friday 4:00 - 6:00 pm. ALL COVID PRECAUTIONS EXPECTED. Mask & Social Distancing. We WILL MEET YOU AT THE GROUND LOBBY FIRST. Location! Location! A be...

Drive home to a quiet cul-de-sac in Kaneohe with the majestic Koolau mountains as your backdrop. This two bedroom, two bath unit feels just like a single family home wit...

Direct ocean views from the doorsteps of your home! Located one lot away from the Pacific Ocean, this is the property you have been looking for. Large 8,484 sq ft lot of...

Discover your new lifestyle in this custom built, single level tile home in the Delightful Halekou neighborhood. Capture the breathtaking Ko'olau waterfalls right from yo...

listed for MLS data entry only

Whether it's the forever views of Kaneohe Bay or the Koolau Mountain Range out the back, you're going to love this high floor unit at Hale Anaole in the heart of Kaneohe ...

Welcome to this beautiful home, there is a carport as well as a large driveway that wraps around to a remarkable back yard area, with a deck and breathtaking mountain vie...

Resort-style living in the heart of Kaneohe! Enjoy breathtaking views of the Ko'olau Mountains from your perfectly situated lanai! This stunning move-in-ready unit featur...

Enjoy this spacious and breezy home with over 3600 square feet of open living space, set on a huge level lot on 11,300 sqft of land. Enjoy beautiful panoramic views of th...

***FREE PUPPY with home purchase*** really! Located in the heart of Kaneohe you will find the home you have been waiting for. Featuring 6 bedrooms, 4 full bathrooms, 2...

Nestled at the base of "Crouching Lion" sits this custom built 4 bed 4 bath home with ocean and mountain views. Designed to take advantage of the refreshing trade winds a...

Based on information from the Multiple Listing Service of Hicentral MLS, Ltd. Listings last updated on . Information is deemed reliable but not guaranteed. Copyright: 2022 by HiCentral MLS, Ltd. IDX information is provided exclusively for consumers' personal, non-commercial use. It may not be used for any purpose other than to identify prospective properties consumers may be interested in purchasing.

The town of Kaneohe, Oahu's windward coast, with its jagged maintain peaks, lush rainforest climate, and clear blue waters, feels like stepping into another world. This breathtaking region was the backdrop for multiple Hollywood TV shows and films, such as 50 First Dates, Gilligan's Island, and Jurassic Park. Located on the eastern side of Oahu, Kaneohe is only 25 minutes from Honolulu, through the Ko'olau Mountains by the H3, yet is a community all its own.

Kaneohe was once largely owned by the Castle family but has been sold over the past century to farmers, families, and developers to become the town we know today. The town is now home to the Marine Corps Base Hawaii (MCBH), with larger homes, estates, condominiums, and townhomes throughout the community. Popular streets and neighborhoods include Mahinui, Lilipuna Drive, Temple Valley, and Haiku. There are several townhome and condo developments in Kaneohe: Poha Kea Point, Makani Kai Marina, and Kau Hale Beach Cove. Beachfront properties are rare in Kaneohe, as much of the shoreline is reef and rock. However, Kaneohe Bay, which rests just North of the neighboring town of Kailua, is one of several marinas on Oahu and is a perfect spot for a sailboat slip while visiting Hawaii. The area around Kaneohe Bay is home to beautiful Marinafront and Marina view homes and properties overlooking the blue, Pacific waters.

Strong winds from the East make this area a hub for kiteboarders and windsurfers, with scenic spots such as Chinamans Hat as the backdrop. Surf spots are few, however, if you are lucky enough to access MCBH, you can try Pyramid Rocks or North Beach for waves. Golfers will find several options in Kaneohe: Pali Golf Club, Ko'olau Golf Course, and the Klipper Course in the Marine Corps Base. And Windward Mall, the largest shopping center on the Windward Side, has everything you need for shopping and entertainment.

If you are looking to purchase real estate in Kaneohe or any property on Oahu, call Orion Barels (RA) today to discuss your needs. Military personnel stationed in Kaneohe will find several options for financing, including VA Loans with 0% down and low interest rates. 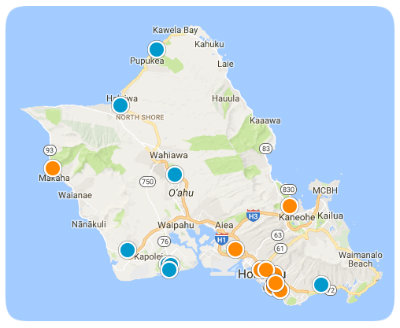 Stay up to date on the Hawaii Real Estate Market!

Create Your Own Market Report